On September 1, 1917, over two hundred people gathered for a large picnic and watermelon feast for the informally opening of the Lakeside Country Club and Golf Course. Lakeside was a place of luxury with four tennis courts, a dance floor, a swimming pool, and a golf course on 135 acres. The clubhouse was of an English rustic design and cost around $14,000 to build. Before its grand opening, it already had a full membership of 500 and a growing waitlist.

Over the years many women played golf at the country club and in 1920 the club held its first big tournament. Lakeside decided its “Sunshine Nine” wasn’t event and doubled the size of its course becoming the second eighteen-hole course in Oklahoma City. The Stapleton Handicap Cup was the first tournament used to dedicate the new course. It would be one of the most successful country clubs in the OKC area for the next three decades.

In 1950, the Lakeside County Club and Golf Course just east of Lake Overholser became the Lake-Air Drive-In Theatre. Built and operated by Robert E. and Charles B. McFarland, the Lake-Air Theatre was one of three drive-ins in the US (at the time) to have a projection booth at the back of the 600 car lot instead of in the center. This prevented distortion of the film playing. The Lake-Air Drive-in made its debut on April 18th, 1950 with its first showing of Francis on its 60-foot screen. With its state-of-the-art projection and having the largest screen in Oklahoma City, the thirty-cent admission was a steal at the time.

Some of the films that showed there over the years included War and Peace, The Sun Trails, The Bad Seed, The Lone Ranger, Written on the Wind, Oklahoma! and Pillars of the Sky. In April of 1958, the drive-in underwent some updates including cleaning, painting, repairs, and improvements. A new enclosed balcony and patio, new equipment for the projection booth and outstanding landscaping. It reopened with the film Cowboy.

In 1959-60 Lake-Air was sold to local theater magnate, Robert Lewis Barton who owned it until its closing after the 1967 season. The drive-in closed after the 1967 season after being bought up by Spectro Theaters in an attempted remodeling and merger. All nine drive-ins owned by Barton were purchased and unfortunately, Lake-Air never reopened as a theatre.

But motorists started to speculate what was happening on the grounds in 1987 when dirt began to be moved, sod laid, thirty-foot poles and green nets. Shortly after it was announced by new owner Dale Watson that the former drive-in would be heading back to its roots and opening as the new Lakeside Golf Driving Range. Watson, who lives in Yukon, said he got tired of driving so far to practice and wanted a driving range closer to home. The grounds reopened with putting green, batting cages and a miniature golf course. This was a short-lived venture and the course was abandoned again in the late 1990s.

In a wonderful turn of events, our Abandoned Oklahoma website has formed a connection again! Some of you may be familiar with the Billboard Museum which strives to save Oklahoma’s historic signage. The Billboard Museum actually saved the Rio Siesta Motel sign. In September 2021 a gentleman by the name of Brian Choate commented on this article. His comment included a picture of his grandmother standing in front of the Lake-Air Drive-In sign. Now owned by the Billboard Museum Association they found Brian’s comment and responded with the following, “Brian! I’m so glad you posted this. This is the only photo we’ve seen of the sign still intact! We are the Billboard Museum Association and now own the sign. The family has no images and we’ve been scratching our heads as to what it looked like!” We love when we can bring a memory back, form a connection, educate or help preserve. What a cool story!

My grandmother in front of the sign when she was young. I miss her everyday 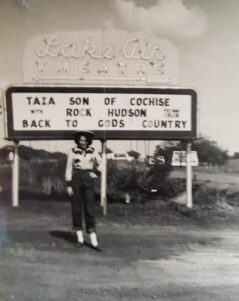 Brian! I’m so glad you posted this. This is the only photo we’ve seen of the sign still intact! Could you please get back to us? We are the Billboard Museum Association and now own the sign. The family has no images and we’ve been scratching our heads as to what it looked like!

After it was closed as a drive-in, it was turned into a go-cart track. I know…..I went to both! I grew up in Warr Acres.

When I go to route 66 park, right before I go on the bridge, I can look back and see it

Any explanation for why the words 'Bag Lady' are stencile over the door?

I grew up in War Acres and remember this place well. After it closed as a theater, it had a go cart track at the west end of the property, then it was home to a driving range, and I think a small church went in there for a short time, and also it was someones residence for a while as well.

I grew up in War Acres and remember this place well. After it closed as a theater, it had a go cart track at the west end of the property, then it was home to a driving range, and I think a small church went in there for a short time, and also it was someones residence for a while as well. I remember the Coronado theater as well. The first place I saw " It's a Mad Mad Mad World" and "Vanishing Point". Anyone remember the Coronado Shopping Center that was behind the theater? There was a radio station… Read more »

Anyone have pictures of the Coronado theater and or shopping mall? Also looking for Twilight beach and Twilight Gardens Drive-in.

I have pictures of Twilight Gardens when it was first laid out. My father was the man that landscaped and laid out the water/plants/lights when it opened. He did such a great job on it, his next project was the very large Southwestern Bell plan on Reno between Rockwell and Council.

I am trying to put together a history of the Coronado…any help would be apreciated.

Yes to the man who said there was a drive-in on the south side of Lake Overholser, about 10th and Lakeside Drive, east of the 10th Street bridge on the hill on the north. This, I believe, was also the location of Jesse Chisholm's store. It blew away in a tornado sometime in the 1920s, from what I think I remember. I think this one was called Lakeside Drive-In. i'll ask my brother. I went to the Coronado too. I got kicked out several times in one night, and we went there Sat. mornings, and when I got older, every… Read more »

It is posted No Trespassing and is gated with a padlock. I took pictures in February, through the fence. This was the first movie I ever went to. I was 17 years old, with my boyfriend, whom I married. A couple from my church were caretakers in the 1950's and lived on the property. There is a house east of the building up the drive, barely visible on the east side of the drive. The poplar trees on the west were the backdrop for the screen. The site is at Rt. 66 & Canal Rd, across from the old Rt.… Read more »

My grandparents lived on that property from June 1965 until the summer of 1969 while they were students at Bethany Nazarene College.

Is this in gang territory at all? Would it be ideal for a photoshoot or not?

This is right on the north side of 39th Expressway, West of Council Road. It is not even close to "gang territoty". It is a safe area, and I think it would be a great place to shoot pics.

I've always wanted to go to a drive thru, but most of them went out before I was born. I've only seen one once, it was an abondoned screen and a parking lot. The rest of it looked like it was destoryed. It was somewhere in Alabama. I haven't seen any here in OK.

the winchester drive in is still opperational…. not sure where its at exactly

admiral twin in Tulsa is alive and well.

I remember going to the Coronado in about 63. Think Elizabeth Taylor was starring in Cleopatra. Seems it had a balcony and stairs.

been doing some memory lane surfing , found this
http://www.drive-ins.com/gallery/oktlake

Wow, I grew up near this place and have always wanted to check it out. So glad to see someone has explored it! Thank you!

The new interior pictures are great as always. Thanks!

Were you not able to get into the building? There must have been some interesting things inside there.

hey dan, this is on a list of things to do. There is a fence halfway in and I never crossed the property line. I like to research places before going in to have an idea of dangers and also to be aware of the ownership. The pictures were taken while out scouting locations and we haven't made a trip back yet.

Prior to being a driving range, it was the Lakeside Drive-In.

Thats what we thought, but I couldn’t find any information on the location. on the back side of the building, you can see the projector windows on the top floor. I’ll see if I can dig up anything on the drive in.