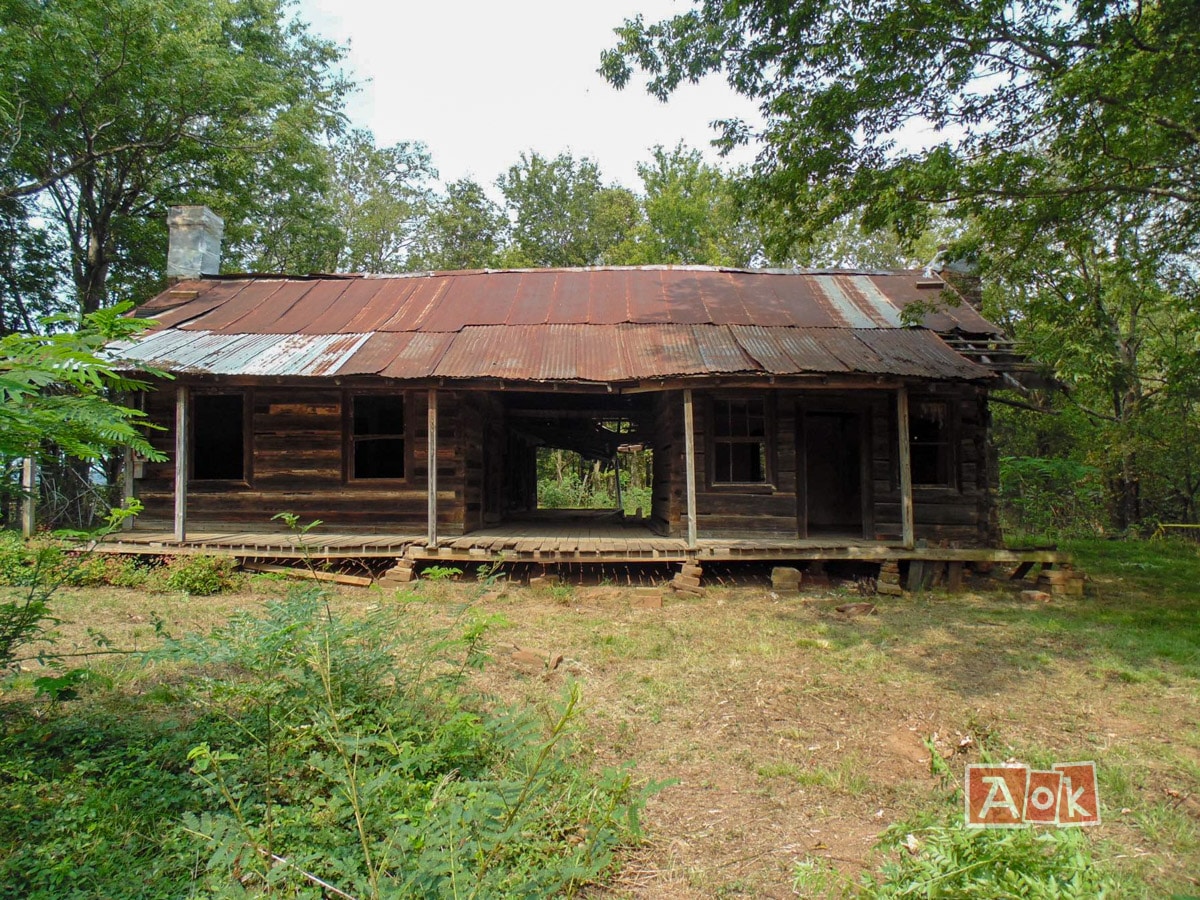 Thomas Edwards was an English immigrant but came to the United States from New Zealand. While it is not entirely sure how he ended up in the Choctaw Nation the assumption can be made that he traveled with fellow traders to pursue the great opportunities for trade there. In 1850 he met and married Nancy Hardaway who was part of the Choctaw Tribe. They began looking for an area to build a home and store within the Choctaw Nation that would bring in a lot of foot traffic and settled along the Fort Smith-Boggy Depot Road.

The house was constructed with logs cut from the nearby pines in 1850 as two rooms and a well nearby. One room featured the kitchen and dining room with a breezeway separating the bedroom. The bedroom was furnished with a double bed, chest of drawers, and a small table with a kerosene lamp. A fireplace feature was built in the bedroom constructed of native stones and included a mantle. In 1870 an addition was constructed, another bedroom that would be used as a living room across from the first and separated by a breezeway. Another addition of three bedrooms was constructed in 1889 after Jesse Hardaway gained ownership of the property. Hardaway family members occupied this homestead and land for 121 years with the last occupants being

The Edwards Store was a single room constructed of logs, built the same year as the house. It included a fireplace of course and had a hitching post outside for the travelers to tie up their horses. With it being right along the Fort Smith-Boggy Depot Road and the Butterfield Overland Mail stage line the Edwards had reached the success they were after. It became a stopping place for those wanting a warm meal or those that wanted a short break from their journey delivering mail or passengers. Meals were served at .45 cents apiece, back then that was a lot of money but it was worth it. According to the Edwards records he excelled as a produce dealer often trading for items such as animal hides, livestock, and produce. The store also sold tobacco, clothing, and food for the travelers stopping in.

Because of the convenient location of the store locals left mail there to be picked up by the carriers riding the Butterfield Line. This birthed the idea that the store should be an official post office and on March 11, 1868, it was established with Edwards being the postmaster. The name ‘Red Oak’ was chosen because of the surrounding giant red oak trees that surrounded the property. A copious amount of mail was distributed here as well as many subscription newspapers.

After Thomas Edwards passing on October 16, 1883, his wife Nancy took over and continued operations. Her nephew Jesse Hardaway started clerking at the store in 1880 until Nancy’s death in 1888 to which he then took over management of the store entirely. He inherited the rest of the property as well and moved his family into the Edwards’ home. It was this same year that the Choctaw Coal and Railway Company was granted permission to build a railroad. This brought in many new businesses and settlers creating lots of competition for the Edwards Store. With mail being brought in by train the post office was moved from the Edwards Store to the new Red Oaks townsite. Around 1890 Jesse chose to give up running the store to focus on his farm.

On April 13, 1972, the Edwards Home & Store was listed on the National Register of Historic Places. It was last occupied by Edgar and Lulu Hardaway in 1981 and has sat abandoned since. Sixth generation, Chrissy Dickkmeyer has set out a mission to save her family’s piece of history that predates Oklahoma statehood by fifty-seven years. They have since cleaned up a lot of debris around and inside the property as well as taken care of the overgrown brush that once hid the log cabin. Now Chrissy and volunteers are taking on cleaning up the nearby family cemetery and gathering donations for the bigger tasks of the project.

“We received a grant this year from the Oklahoma Historical Society to stabilize the chimneys. We are continually keeping up the grounds. Installed gate and fencing to head off and combat vandalism. We’ve established a 911 updated address. We have obtained an estimate of the cost of preserving and rebuilding. I am preserving and documenting, and cataloging all family documents and photographs. The plan is to stabilize, restore and open it up to the public for educational purposes. Donations are going to the local Bank of Red Oak and directly go to preserving the cabin and all the historical antiques/contents. This has been a dream of my late father, to open it up for future generations to know our history. When he passed away I carried on his dream and was contacted by June Lester Chubbuck, our Board Secretary and Grant Writer, 3 years ago and with the help of Michael Duncan, our Board Treasurer, we formed a nonprofit organization to save the store,” said Chrissy Dickkmeyer.

To donate, stay up-to-date, and volunteer go to The Edwards Store Inc. on Facebook.

The Edwards Store or Old Red Oak by I.C. Gunning

Some migrants paid $5.00 to enroll as a tribal member. Has this been researched?