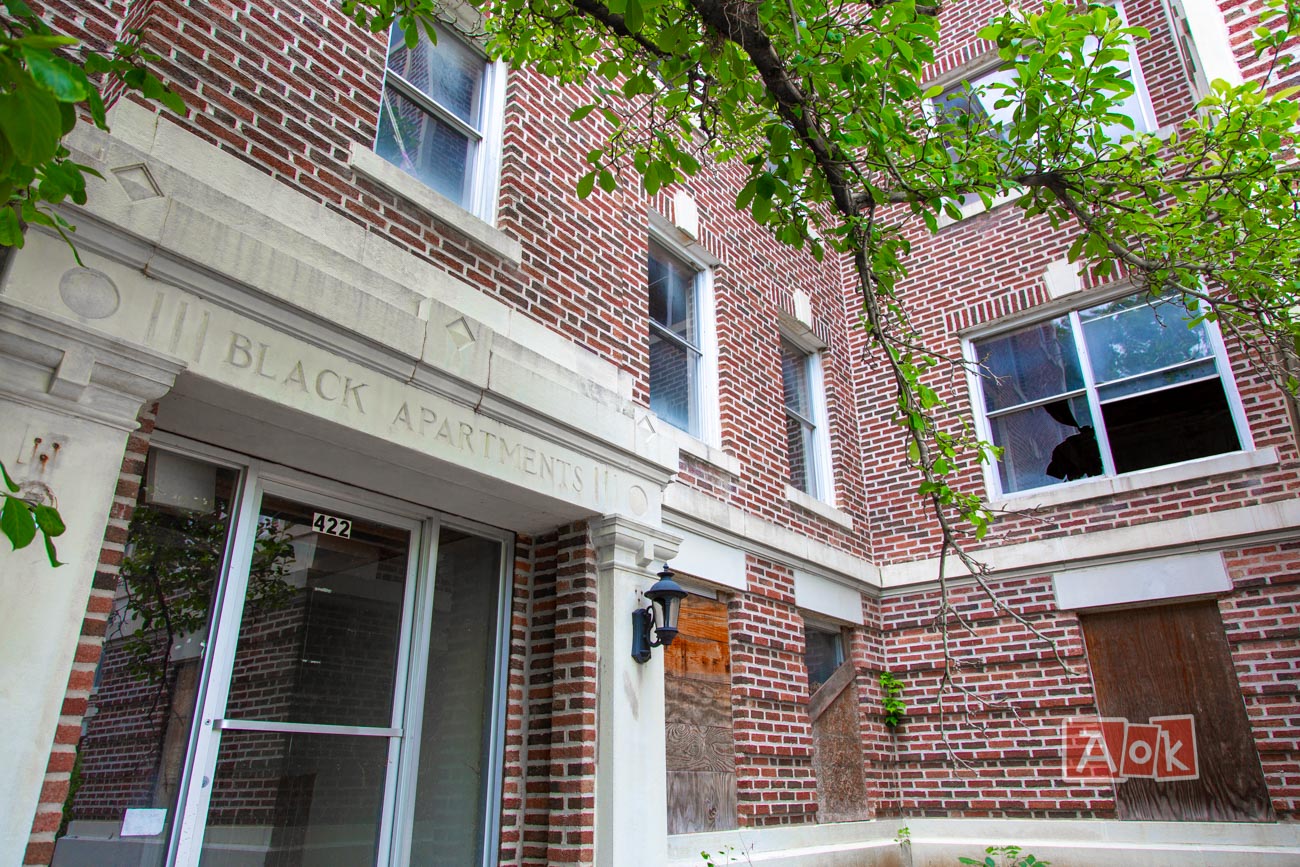 The four-story Black Apartments were named after and owned by E.R. Black. Built in 1920 for the residents of the growing town of Okmulgee, the job was not completed smoothly, a newspaper article below tells of the struggle between contractor and unions.

Okmulgee Daily Times 24 Jul 1921, That one contractor in Okmulgee lost $3,279 on one job alone when the unions raised their wage scales “overnight” was the charge made by the Okmulgee builders association yesterday in their fight to reduce wages in the city. The job they said was the building of the Black Apartments and while the contract for the work was taken on a basis of $8 a day labor, the unions raised their scales to $10 in most cases before the job was completed. The loss on the increased scale of the carpenters they charged was $1,466. On the masons, they said the loss was $852. On the lathers, a deficit of $216 was met, and on the plasters, they lost $745 they said. In the statement, the contractors listed the previous wage scales with the increased scales and showed what the exact loss was.

Below is a story of the Janitor of the Black Apartments allegedly going insane:

Okmulgee Daily Democrat 14 May 1922, Tom Perry, a janitor employed at the Black Apartments was arrested yesterday afternoon and lodged in the city jail after a struggle with policemen after he is alleged by the police to have become temporarily insane and made threats against the tenants. E.R. Balck, the owner, received complaints of the janitor creating a disturbance and asking that he be taken into custody. A policeman found Tom Perry had locked himself in a room and refused to come out. The Chief of Police had received permission to break down the door which then proceeded in three officers rushing in to subdue Perry who was only in his underclothes and shouting obscenities.

The Black Apartments have been closed and uninhabited since the late 2000’s, the property has been listed numerous times on different realtor sites but finding a buyer has been unsuccessful. Time, decay, and water have taken their toll on the property leaving it with a lot of water damage and numerous areas where the floor/ceiling has fallen through.

Gallery Below of Black Apartments

It looks like it was a very expensive building when new. I know that Okmulgee had lost a manufacturing base that it once has. I doubt there is a business and banking base to rehab such a building in that town. Now, if it was in the Tulsa or OK City areas, I’d be looking for some one to have done this already.

Just wondering if you had checked public records for the current owner and asked permission before entering the property and posting this online?

You think some agencies could get a Grant to referburshed it, add A/C & rent or sell new apts or condos

Hi Ashley! We got our facts from several of the neighbors that live next to the property for over 30 years. They mentioned it had been abandoned for as long as they lived there. We also looked at historical records. There wasn’t much to find, but thank you for the info and we acknwlogede that we make mistakes too. Those carpets sound interesting. Thank you for your comment and insight. We always appreciate personal accounts and we will update our post. Thanks again. Do you have any pictures from it looked like then?

No need to be rude. Aok does a great job and I love there site. So many great pics and info. How about you just inform, instead of scrutinizing. peace 🙂