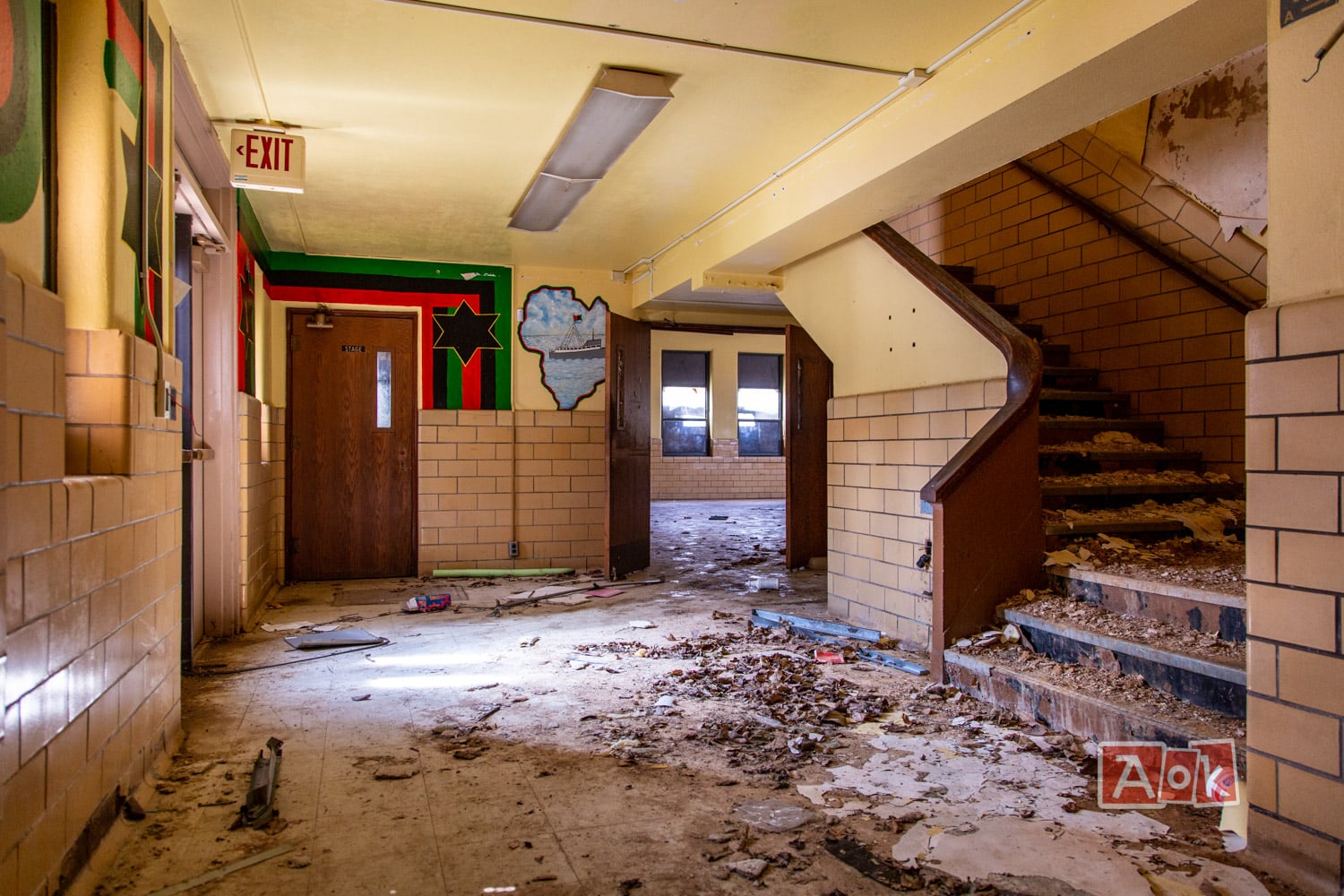 The story of Marcus Garvey Leadership Academy goes back to the 1920s. The $55,000 building was erected in 1927 as Harmony Public School. It opened its doors to students in the January 1928 school year. In its first semester open it hired three new teachers, established a kindergarten for the next semester, welcomed twenty-five new transfer students, and an expansion. One of the old Harmony buildings was moved to the new school as a cafeteria addition to serve hot lunches to students. It gave incredible leadership, growth, and resources to its students through its teachings. In 1943, a brick gymnasium/auditorium was added onto the school allowing the students to participate in more musical and athletic courses. Serving the community for nearly fifty years ownership and name of the school were changed.

It became Martin Luther King Jr. Elementary/5th Year Center in the 70s. The school prided itself on teaching and celebrating Black culture and heritage. In 1986 a parade, play, discussion, and special luncheon was held for slain civil rights leader Martin Luther King Jr., on what would have been his 57th birthday at the school who kept his namesake. In fact,  it was the first school in Oklahoma to be named after King. After around thirty years the school became vacant and a search for new tenants was underway.

In 2003 Marcus Garvey Charter School was considered to lease the Old Martin Luther King Jr. School. The district board members weighed in on whether they should allow the school to bear the new name of Marcus Garvey and asked the district staff to collect biographical information on Garvey himself and look into the district’s policy on renaming school. Marcus Mosiah Garvey Jr. was a Jamaican publisher, journalist, and founder of the Universal Negro Improvement Association & African Communities League. It was approved and thus solidifying the new Marcus Garvey Leadership Academy school at the end of 2003. Throughout its years open it continued the legacy of providing students with in-depth teaching of African American heritage and culture. Offering some of the most unique classes in the district. Damon Frazier, musician and teacher of Afrikan Drumming and Rhythms at MGLC. He is credited with creating the Sankofa Drumming Ensemble for the students who played in churches, state-wide events, and OU.

It was open until 2014 serving 197 students in grades Prekindergarten-8 its last year. Its closing came due to low test scores and overall GPA of students reporting an average 1.32 GPA, and a grade of ‘F’ in reading and math test scores although attendance was at 97%. Another reason that led to closing was sexual assault allegations and mismanaged funds. The school district was paying for meals at Marcus Garvey but the school was also receiving federal funds for those same meals. Instead of using the federal funds to pay the school district back, Marcus Garvey Academy kept the money. When district officials pointed out the problem, Marcus Garvey Leadership Academy eventually paid it all back but at the time it didn’t have all $92,000 on hand.

In early 2013, Pascal Wayne Jones, a coach and teacher at the school was charged and arrested on twenty-five felony sex crime counts, including ten counts of forcible oral sodomy, ten counts of lewd acts with a minor, and five counts of rape by instrumentation. Jones, 42, allegedly, would lock the door to his classroom during elective hours, and then the sexual encounters would occur. The time frame of the incidents is said to have taken place from November 2011 until March 2012, occurring more than a hundred times. When Jones’s accusers’  mother found out about the alleged assaults, she transferred her daughter to Crooked Oak Public School. Jones was then caught stalking and attempting to contact the girl at Crooked Oak in an attempt to get her to recant her story. The mother then filed a Victim’s Protective Order (VPO) against Pascal Wayne Jones. In addition to investigating the alleged molestation by Pascal Jones, police are investigating whether or not the school district did enough to protect the girl. The accuser told police that she spoke to school staff about the molestation in 2011, but that nothing was done. A police report was filed in June 2012 based on DHS referral, but the case was determined to be unfounded because, at that time, the girl denied having sex with the teacher. Jones is also the former head football coach, girls’ track coach, and assistant boys’ basketball coach at Capitol Hill High School until his resignation in 2008, following his an arrest for marijuana possession.

What ever happened to the former teacher accused of the crimes? I tried to look him up and could not find anything on oscn.net or on offender search. Wierd.

In 1972 or 1973, I was bused to this school from the south side of OKC, just a couple of blocks from the school I would have attended had it been one year earlier. It was called Martin Luther King Jr. 5th Year Center at the time, but everyone knew it as Harmony. This was a big deal. A very big deal. Protesting and picket signs at the bus stops and angry parents. A lot of controversy. Forced busing went over like a pregnant pole vaulter. Change is hard. The bus ride took about 30 minutes and it was cold… Read more »

wow! What a legacy and tragic ending.﻿

are we allowed to go in an explore?

It has a working security system you will need to obtain owners permission which you can find through the property tax agency.

Hello! I am trying to get in contact for permission, I’m having troubles finding the property tax agency

Would be great if this building could be saved and repurposed. My kids go to some old schools here in OKC (Classen SAS and Wilson Elementary. I love the old architecture and see it in this building.﻿

Amazing …one can almost hear the kids