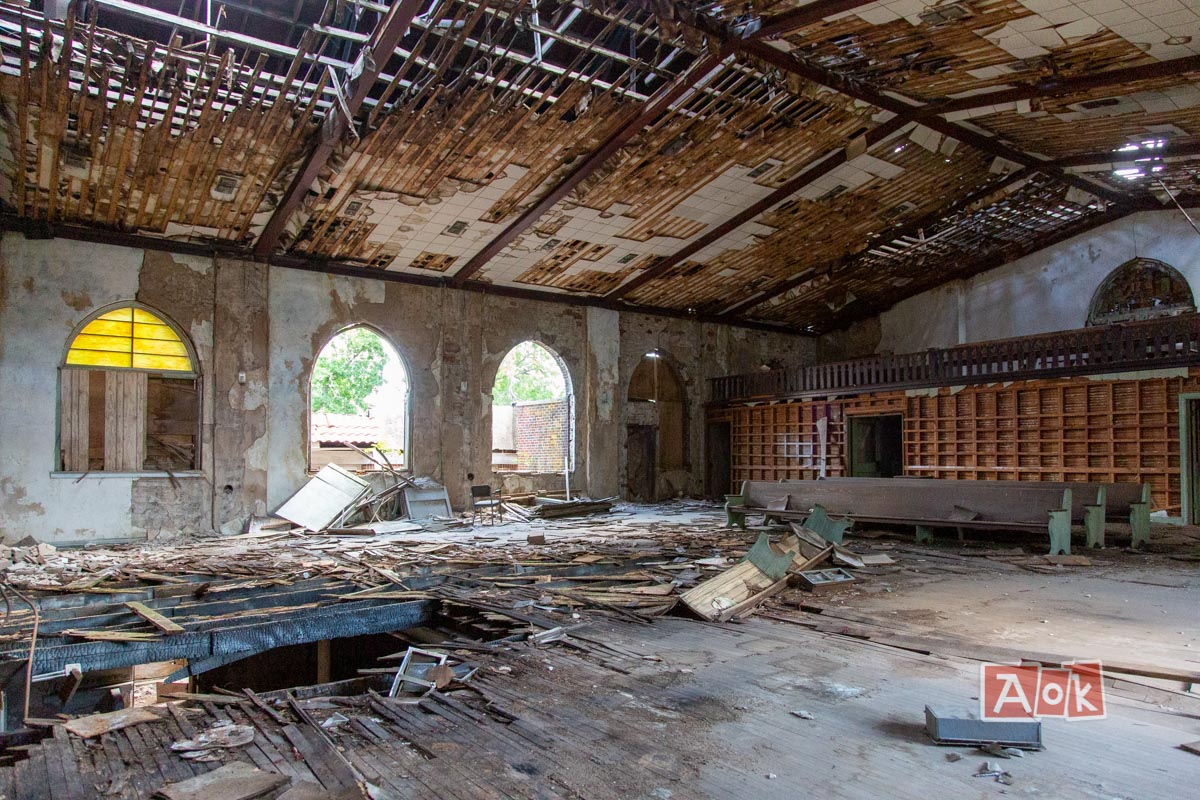 Around 4 p.m. on January 22, 1981, a three-alarm fire gutted the three-story Mount Pleasant Baptist Church. The church, which was valued at around $190,000 after the blaze, was brought under control by nearly fifty firefighters after an hour of the flames ravaging the memories stuck inside. The damage was estimated to be around $50,000.

The cause of the inferno appeared to be at the hand of a faulty water heater. Deacon Royce Lewis said to officials that the church was uninsured. Stained glass was broken in order to access the flames and much of the interior was damaged. The church pews, piano, choir robes, and pulpit all survived. A meeting was held amongst Pastor Seawood Herschel Evans and the congregation soon after to decide what to do next. Pastor Herschel Evans first concern after news of the blaze was finding a space in the annex for the upcoming Sunday service.

Firefighters were able to save the three-story annex which was used as a makeshift sanctuary just days after the fire. Members of the congregation saw it as a day to celebrate the many symbols that proved “God is a mighty good God.” Rev. Scottie Hudson was one of two ministers leading the sermon, “We’d like to thank the Lord for saving the piano. We’d like to thank the Lord for the choir being in the right place. Just when we thought everything was going our way, something happened. Are we going to let that stop us?” he preached. One member had positive outlooks saying, “The structure being burned as it is, you would have thought we wouldn’t have a church. Instead, He gave us a beautiful church service right here” she continued, “I got on my knees and said ‘Lord, please don’t burn the north end of the church or the south end of the church so we won’t have to go someplace else.’ And He did it.”

Rev. Seawood Herschel Evans walked the soot-covered sanctuary, “It’s ironic that not all of it was gutted. Some of it was left intact. It seemed as if the annex had been prepared to move. It was like a blueprint. Those patterns, those things, help relieve the anxiety. I know these things are His will. My father helped organize this church, back in oh I’d say 1944.”

Deacon Royce Lewis organized workdays every Saturday to help clean up debris and soot from inside the burned church. It is uncertain what happened to these efforts and what is to be done with the building as it has sat empty for almost forty years.

As I write this the Mount Pleasant Baptist Church is no more. At around 10 p.m. on October 19, 2020 a 3rd alarm fire engulfed the building and everything inside of it. Fire crews arrived around 10:06 and were met with collapsing bricks and flames to the roof. The building is a total loss and the front surviving portion will soon be demolished, leaving no trace the church was ever there. Another piece of history is gone today.

**LONG POST** Thank you AOK for uploading the initials pictures! For as long as I can remember, I use to ride with my grandmother as a very small kid (early 80’s) to church every Tuesday (choir rehearsal), Wednesday (Bible Study) and Sunday’s for morning worship…passing by this church every single time. Although we were not members of Mt. Pleasant, my grandmother’s usual direction in her ’78 Impala to the Fairview Baptist Church was heading South on Prospect. As a kid, I ALWAYS wondered what this church “looked like” on the inside; it was massive. Why was it so run down?… Read more »

Thank you for those reflections Antwain! It captured every sentiment that I had from my childhood as well. My aunt used to live on 20th and we would drive by that church countless times and I would have all of those same questions. When I became an adult, we used to do contracting work with the Oklahoma City Housing Authority and we rehabbed some of their homes in that area. I would either walk to the church and stand and marvel at it or drive my car there and park on the street and marvel at it. I just could… Read more »

Unfortunately, it is all history now. As I write this, it is burning to the ground. So sad to see old landmarks like this lost to fire.

Are you down there? Can you take some pictures?

OCFD has photos of Ladder 6 on their FB page

What is the address? How can I find this place?

I’m sorry Amanda, we cannot disclose the address of this location. Our apologies.

I would have went up those stairs.

It was definitely sketchy, but there wasn’t anything up there, I was hoping it was to a secret room.

Beautiful church at one time! I am sure it could be restored to its Beauty!! Love looking! Love the pictures! Always loved taking pictures!Jeanie Loveland

I can imagine all the weddings and funerals in this. Sad

This sad. Was such a beautiful church In Its day.

Thank you! Yes, a very sad story but also hope! It’s a mess but looks to me like there’s lot of good, useable wood to be had. A demolition crew could salvage a lot to be sold and if noting else, the brick is worth a fortune!

Pews should have been saved too.