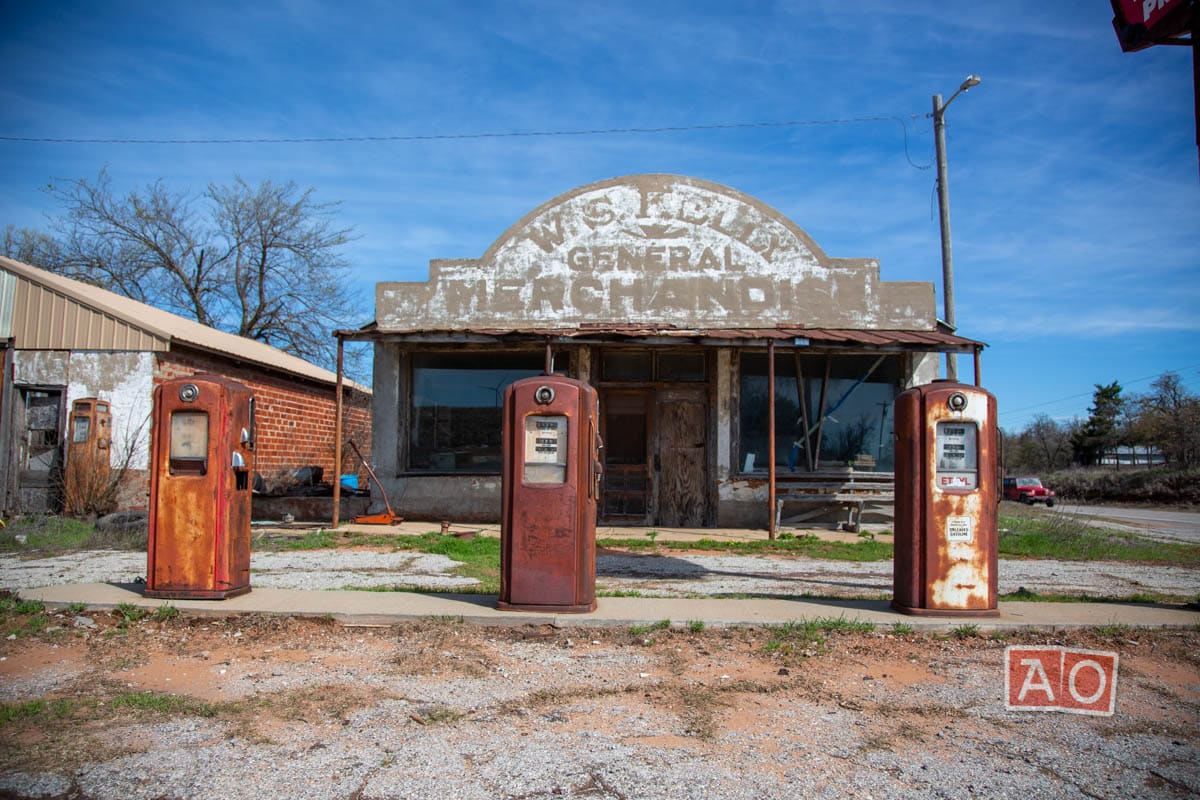 Wilbur S. Kelly built the W.S. Kelly General Merchandise store in the mid-’20s in what was known as “New Cogar”. He ran the store for a short period of time before moving to California where he became very successful with gas stations. According to Carl Lehman who grew up knowing Mr. Kelly, “He used to tell us Pretty Boy Floyd would come in the store back then being as the country was full of crooks and bootleggers. He always said the Floyd was a nice gentleman but he would come in with a fellow named George Birdwell and he was scary, wouldn’t mess with him.” Kelly sold his store to Roy Bassett who had owned Roy Bassett General Merchandise in Old Cogar in the early 1930s. The Bassett’s were looking to move to New Cogar for better business along highway 152.

When the Bassett family moved into the W.S. Kelly in the 1930s. The store advertised “Lab Tested Superior Feeds” on the side. The Bassett family having previously successfully ran the Post Office in their General Merchandise store in Old Cogar, got the Post Office moved into their new store. Amy Bassett, Roy’s Wife, was postmaster in the store. According to The Verden News, Nov. 19, 1948, Roy Bassett’s Store was used as an election polling station as well.

Roy Bassett leased the General Merchandise store to Jesse H. Schrantz in the early 1950s. It then became known as Schrantz Store and Station.  Jesse became postmaster when taking over the store until it was discontinued on September 30, 1954. Post Office boxes were later removed and replaced with hardware cubbyholes by the Lehman’s but the Post Office safe still remains inside. Schrantz operated the business up until 1958 when he moved his family to Colorado.

Carl Lehman was eight years old when his father bought the store in 1958. The most fascinating thing about this particular building is none of the original features have been replaced since the 1920s when it was constructed. “I can still remember sitting on this exact bench when I was a kid, I’m pretty sure a neighbor built this for W.S. It’s been here as long as I can remember.” Carl Lehman mentioned seated on the half dismantled bench on the front porch. Upon their new purchase, the Lehman’s put a sign up on the tin porch roof reading “Lehman’s & Son Grocery” and left everything else the same. They continued selling groceries, farm accessories, fishing supplies, tools, and other “general merchandise.” Carl can still remember closing 1 day every year to repaint the floors on Christmas. “This is where I grew up, I’ve seen so many people coming in and out of this store”, Carl mentioned while giving us a tour. “We had a few break-ins in the late ’60s. Someone stole some gun ammo, fishing poles and didn’t get too far because their car broke down 3 miles out of town.”

This little store ending up not only serving as a merchant for goods but also serviced cars, became a bus stop for nearby towns, and of course, APCO gas and oil products. This started a few years into the new ownership given that APCO was founded after Anderson-Prichard Oil Corporation (founded 1922) were officially permitted to use the acronym in 1960. They started and continually sold about 30,000 gallons a month until 1973. “They [APCO] cut us down to about 7000 gallons a month.” All supplies from the APCO Oil Corporation slowly diminished over the next 6 years until the Oil Company completely dissolved in 1979. The Lehman’s were able to stay open 1 year after that. “We just locked it up.”

The movie starring Tom Cruise and Dustin Hoffman features two brothers traveling across the country. One of the filming locations took place at the W.S. Kelly General Merchandise APCO Station in the tiny town of Cogar, Oklahoma. In the scene featuring the Lehman’s store, the two stars stop at the phone booth to make a phone call. The phone booth was a prop put in place by the producers, the scene was filmed on June 2, 1988. About a hundred folks from all over came out to watch the filming and meet the stars, “Dustin Hoffman went out of his way to make people feel good about being there. I heard him (Hoffman) say we was a pretty good bunch.” said Richard Allen a long time resident of Cogar.

Until 2020, the building remained untouched and still had everything in it from the day it closed. Price tags on unsold sunglasses, refreshments in the refrigerator, and records dating all the way back to the WS Kelly era.”We used to buy cream and eggs and stuff back here and had a cream separator sitting over here that somebody stole” they have had a problem with vandals.

For many years Carl lived in the family house directly behind the store since his family first moved there in ’58 until 2012 when the upkeep became too much. Carl still lives nearby with the hopes of one day saving this little piece of history he grew up with. Those hopes are soon to become a reality.

When we first approached Carl Lehman to get permission to take pictures inside the WS Kelly Store we had no idea we would be greeted with such kind hospitality and blossom into a two year long friendship. He sat down with us telling us stories for hours about his family and the memories he had growing up at the store. We approached him with the idea of helping clean up the building that made its cameo appearance in the Rainman movie and were met with excitement and hope from Carl who had only ever wanted to see the building come back to life. After several volunteer days cleaning up 2 trailers full of debris and trash, much-needed lawn maintenance the outside of the building was starting to look in much better condition. The next volunteer day was used to tackle the repainting of the sign and cleaning out the inside of the building of debris, dirt, dust and trash. We reorganized the 1980s merchandise and cleaned the windows for those passing by to take pictures could look inside this amazing time capsule. Due to a lack of funding the sign had to be left unfinished because the equipment needed to safely paint the upper portion of the sign and do so in a way that would not ruin the historic featured could not be obtained.

In July of 2022 Carl Lehman passed away after battling cancer. It is unknown what will happen to the WS Kelly Store now.

I grew up running around this store…yes, I remember when it was open! Such a cool place..1958-1980. I have great memories of this place.

How do I recommend a building for your project? I know a building in caddo county that is over 100 yrs old and has been used as several churches and a schoolhouse in the past.

Send us a message(info@AbandonedOK.com, would love to see how we can help!

I remember coming here in 1976. I was on the way to suprise my 3rd wife on her business trip, cheryl. Got some Donal Duck grape fruit juice, Her favorite. turns out she was sleeping with the divorce lawyer, same dy ifound out that was going to happen. Store was grwat though, would visit again!

This is so cool!!! I love that you are sharing this part of oklahoma history! Way to go!

This is so cool! I love that y’all are doing this. ❤️

I drove by this 2 days ago on my way to my grandkids. Excited to see it saved.

n 1959 moved 6.5 miles north of store. Bought gas n groceries there for years. We all loved going to Lehman’s store for bologna and cheese and the visits. ❤️

How great to see so many folks caring enough to be the change. When this building is cleaned up, what are the plans for it?

We are planning to reopen it as a museum and drink/snack shop! Thank you for the kind words 🙂

How awesome! I will have to visit when it is ready

Amazing that all the merchandise and displays are so well preserved. Great to see.