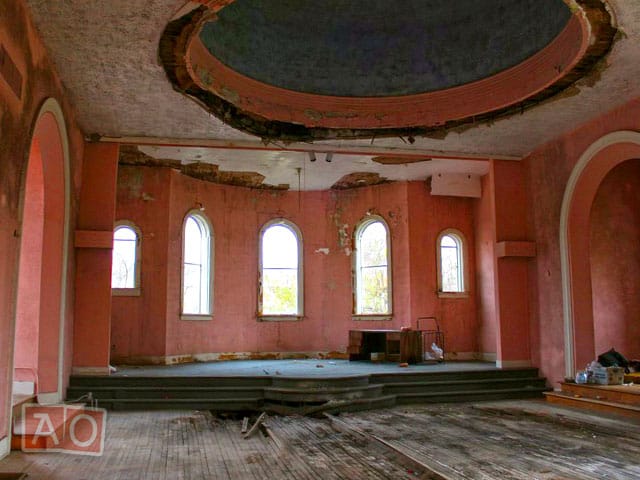 The Greek Orthodox Christians established a congregation on September 25, 1914, as the Greek Society of St. George of Oklahoma City. By 1917 they had secured a charter granted by the State of Oklahoma. In 1921, they had raised enough funds to purchase a parcel of land and build a church for their worship. Members of the church were bombarded with bids for the construction by a number of companies. John Sinopoulo was in charge of picking a company and without a second thought chose Gross Construction Company due to their respectable reputation for fair treatment and good work.

During this period there was great growth among the congregation. They had their traditional Greek festivals which were open to the public during and lent and led many community outreach programs. After sixty years of serving the Greek Orthodox congregation, they outgrew the building and needed a bigger location around 1983. 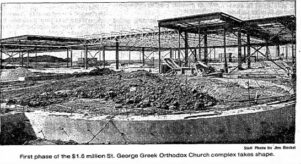 After securing another property work began on a $1.6 million new building thanks to John Bozalis who donated the new chapel design to the congregation. A “John Bozalis Appreciation Night” was held on Sept. 29, 1984, in honor of the Bozalis and Roloff firms gracious donation. The newly built church opened in 1985 and a few short years later on Christmas Eve of 1988, the congregation dedicated a new addition to the sanctuary. The doors to the addition were opened by founders of the first St. George Greek Orthodox Church, “Our entry into our new sanctuary marks a new beginning for all of us, young and old.” said Rev. Demetri Kangelaris. “Our challenge as Orthodox Christians is not to view the entry into the sanctuary only as a physical step into something new, but rather to see this as a spiritual and holy step forward.”

I was baptised there and so was my dad still have the original door, the small rought iron gate is where the priest enters into the church. Used to be a house on the property behind the church. I pass by there every now and then.

does anyone know how I can get in to this area and do some photo shoots with a bunch of models of mine? I just need to know my name and a phone number or contact information so that I don't cross over boundaries without permission. Thanks,
kyle Ripton 580 399 2566

Why are you so obsessed with shooting nude gay models in churches?

I love some of the angles you used in these photos….I enjoy old architecture and you did a good job showing it off!!! Thanks!! Take care—Tery

if you look at #21, you will notice if you look close that the car was removed from the picture entirely. There was a car sitting in the driveway in the original photo… I call it digital wizardry

Very neat place, I sure hope they do something with it, it looks to be in good condition. Oh, and I spotted you get-away vehicle, pic #38, last pic, you can see one of the windows and white metal. Its kind of like wheres Waldo haha.